UKRAINIAN troops have continued consolidating their positions across the Oskil River in the Kharkiv region in the latest humiliating blow to Vladimir Putin.

Luhansk Oblast Governor Serhiy Haidai confirmed Ukraine was now in control of the east bank of the River Oskil, key position on the frontline, adding that the army’s next target would be neighbouring Luhansk.

A video shared a_shtirlitz shows what appeared to be a Ukrainian tank crossing the Oskil a submerged bridge as troops in fatigues watch on the other side of the bank.

Russia’s army has been almost totally pushed out of Ukraine’s north-eastern Kharkiv region since Ukraine started its latest counter-offensive to regain territory.

“Luhansk region is right next door. De-occupation is not far away,” Haidai wrote on Telegram. 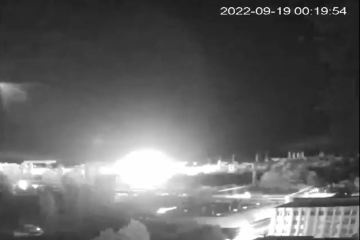 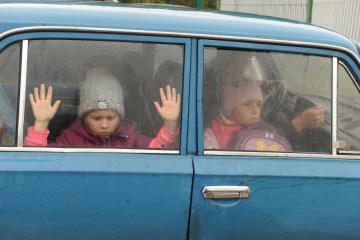 On Saturday, there were reports Ukrainian troops had intercepted “logistics” on the key P-66 highway.

This, President Volodymyr Zelensky said, would pave the way for an assault on Russian forces in the eastern Donbas region.

Indeed, the Oskil flows south into the Siversky Donets river, which in turn winds through the Donbas.

The Donbas is Moscow‘s prized territory and the main focus of the invasion.

The Ukrainian counter-offensive comes as demoralised Russian troops have withdrawn in “panic” from their positions along the River Oskil, according to local newspaper The Kyiv Independent.

Those fleeing have left behind hundreds of vehicles and machinery, and potentially thousands of casualties.

In the city of Izyum in eastern Ukrain’s Kharkiv regione, that was recaptured last week, mass graves containing at least 450 bodies have been unearthed.

Many of the exhumated bodies show signs of torture and execution – probable tales of Russia’s chaotic retreat.

“The newest russian [sic] tank T-90M was found in Kharkiv region in perfect condition. We ask its owner(s) to contact the #UAarmy . Please identify yourself by a sign: a white flag,” the Ukrainian Armed Forces’s account tweeted.

In the south of the country, meanwhile, Ukraine has accused Moscow of shelling the Pivdennoukrayinska nuclear power plant in the Mykolaiv region early this morning.

Rocket attacks have been almost constant in the southern region, where Ukrainian forces are also pushing ahead with another counteroffensive campaign.

The southern campaign’s strategy was to liberate Kherson and cut off Mariupol from the Kremlin’s troops in the east.

This strategy both north-east and south of the country has devastated Russian command and control.

“Further Ukrainian advances east along the north bank of the Siverskyi Donets River could make Russian positions around Lyman untenable and open the approaches to Lysychansk and ultimately Severodonetsk,” The Institute for the Study of War in Washington, D.C, explained in an article.

The thinktank also shared a more pessimistic scenario for the Russian situation in Lyman.

“The Russian defenders in Lyman still appear to consist in large part of […] reservists and the remnants of units badly damaged in the Kharkiv Oblast counteroffensive.”

“The Russians do not appear to be directing reinforcements from elsewhere in the theatre to these areas.”

The dramatic advancement of the Ukrainian army has led U.S. President Biden to predict Ukraine would win the war.

“They’re defeating Russia,” Biden said in an interview with CBS.

He added: “Russia’s turning out not to be as competent and capable as many people thought they were going to be.”

Russian troops have lost more territory in a matter of days than they gained in more than six months of the war.

I got lost with my daughter, 3, in jaguar-infested forest for three days – everyone thought my boyfriend had killed me

Who is Adnan Syed and is he still in prison?