VLADIMIR Putin was “direct” and meant what he said as he “intimidated” the West with a chilling nuke warning, an expert has revealed.

Body language pro Judi James believes the Russian tyrant displayed alarming clues in his “chest-banging” speech that show he is “determined” to carry out his threat as he insisted he is not bluffing.

As he addressed the nation, Putin gave a “hard stare”, “bared his teeth”, made a “chopping gesture”, shrugged his shoulders and “leaned forward” in a bid to display his “determination”, Judi claims.

Putin issued a thinly-veiled threat to nuke the West and ordered the partial mobilisation of troops in his first televised speech since ordering his forces into Ukraine.

She said he showed signs of “urgency” as he frantically revealed plans to scramble 300,000 more soldiers to the frontline in a bid to stop his invasion collapsing.

Expert Judi said Putin – whose army has suffered huge losses in the face of a stunning Ukrainian counterattack – also gave looks of “disgust”. 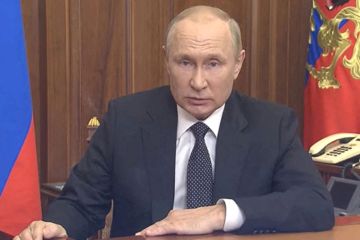 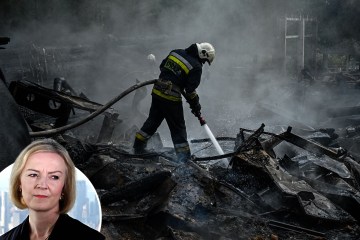 Judi told The Sun Online: “This was direct, emphatic, angry and very dominant body language from a leader leaning forward to stare straight into the camera lens to display control and disgust via his facial expressions and head batons.

“His hands were in their signature spread on the table but the left hand performed a chopping gesture to suggest decisive thinking.

“His movements suggested urgency and a ‘tell’ style that suggested no truck with discussion.”

In his address, Putin said he had “lots of weapons” he was prepared to use against the West.

Judi added: “His nose and his lips wrinkled in micro gestures of disgust.

“His shoulder shrugs suggested a lack of choice and when he spoke of nuclear responses his eye state intensified as his lower jaw appeared to jut, baring his lower teeth in a gesture often associated with anger and determination.

“This looked like chest-banging body language with the hard stare at the end looking designed to scare and intimidate.”

Sergei Markov, a former member of the Russian Duma and close adviser to Putin, blamed the escalating tensions in Ukraine on the actions of the UK and the US.

Speaking on BBC Radio 4’s Today Programme, Markov reiterated Putin’s threat to use both tactical nuclear weapons in Ukraine and broader nuclear strikes on Western targets including the UK.

He also bizarrely denied that Russia had invaded Ukraine, and instead said they were “liberating” the country from “neo-Nazi” groups and Western forces who were using Ukrainian soldiers as “slaves”.

Meanwhile, Kremlin sources have claimed Putin’s doctors rushed to his side after he suffered “coughing fits” and “chest pains” just before his big speech.

Telegram channel General SVR, which claims to be run by Kremlin insiders, wrote that Vlad had fallen ill moments before his address.

‘THIS IS NOT A BLUFF’

The post read: “When the president came out and preparations for filming began, he began to cough frequently.

“Several attempts to start recording an appeal were frustrated due to coughing.

“After the fourth unsuccessful attempt to record an appeal, doctors were called to the president, to whom Putin also complained of chest pains.

“The doctors advised to postpone the shooting and leave with them for examination, which was done.”

It comes as Putin gave his first address to the nation today since ordering his troops into Ukraine in February.

As his calamitous war continues to falter with Moscow losing ground on the battlefield, the desperate despot used the speech to call up more conscripts to bolster efforts in Ukraine.

The total number of reservists drafted in the partial mobilisation is 300,000, officials said.

Russia has lost some $1 billion in military equipment during the blitz, which has seen tanks and ammunition abandoned by fleeing battalions as Ukraine recaptures swathes of land.

Putin said: “To protect our Motherland, its sovereignty and territorial integrity. To ensure safety of our people, and people at the liberated territories.

“I find it necessary to support the suggestion of the Ministry of Defence and the General Staff about declaring partial mobilisation in Russia.”

In his speech, Putin also warned the West that it is not a “bluff” that Russia would use all the means at its disposal to protect its territory.

Putin also accused the West of engaging in nuclear blackmail and noted statements of some high-ranking representatives of the leading NATO states about the possibility of using nuclear weapons of mass destruction against Russia.

He added: “When the territorial integrity of our country is threatened, we will use all the means at our disposal to defend Russia and our people, this is not a bluff.

“Russian citizens can be sure that the territorial integrity of our homeland, our independence and our freedom will be secured by all the means at our disposal.

“Those who are trying to blackmail us with nuclear weapons should know that the winds may blow in their direction.”

Putin also claimed Western countries are trying to “block” any independence and development.

He added: “In order to force their will in brutal ways to other people.

“The aim of the West is still weaken and destroy, they are openly saying that.”

Putin’s televised address to the nation comes a day after Russian-controlled regions in eastern and southern Ukraine announced plans to hold votes on becoming “integral parts” of Russia.

The Kremlin-backed efforts to swallow up four regions could set the stage for Moscow to escalate the war following Ukrainian successes.

The referendums, which have been expected to take place since the first months of the war that began on February 24, will start Friday in the Luhansk, Kherson and partly Russian-controlled Zaporizhzhia and Donetsk regions.